The Reflection of the 2nd Anniversary Celebration

Having attended services at Wat Albury since February this year, I was excited to be able to join in the 2nd year anniversary celebrations on Sunday November 25. I arrived shortly before the proceedings began and was amazed at the amount of people who were already there to join the festivities.

I went through to the kitchen with my food contribution and was met with a flurry of activity. There is always amazing food offered at the temple for us to share lunch together, but it was already obvious that today’s food would be something special. Our regular ‘chefs’ had tripled in numbers with friends from temples in Melbourne and Sydney all offering their services.

Everywhere I walked, I was met with friendly smiles and greetings.
As we all took our places on the floor and in chairs, ready to begin, we made room for the large crowd that had come to join in the celebrations. As always, we started with meditation. The crowded room fell silent as we took the time to focus on our minds and relax. 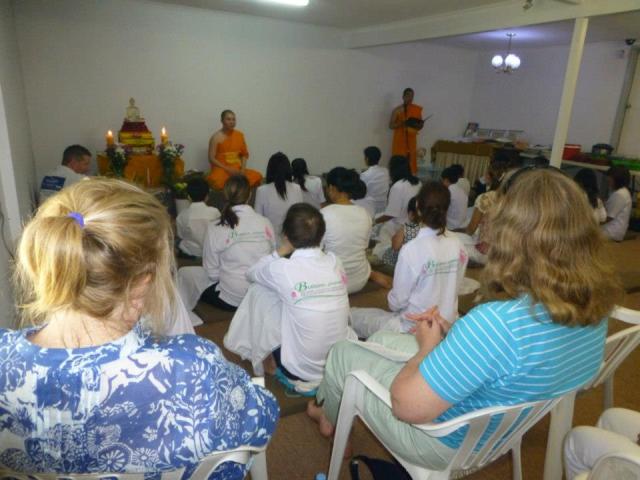 After mediation and our weekly Dhamma talk, Ajahn Satit gave a formal speech to commemorate the day. He spoke of the beginning of the temple, two years ago, when only three or four people would attend the services. Even when I looked back to February, there were times that there were only five to ten people. Now it is full most weeks due to Ajahn Satit’s commitment to building such a welcoming place. As he said in his speech, “We do not ask why people don’t come to the temple. We only look at making temple a good place for people to come. We have to develop good place, good food, good friends and good dhamma.”

As he spoke about the past 2 years, I also reminisced about my time at the temple. I remembered when thieves took lawn mowers and other equipment earlier in the year. When Ajahn told us at the Sunday service after the second theft that the temple was going to donate all other items of value to charity to demonstrate our tolerance and kindness, I remember how proud I was that I was now part of this generous community.
I also thought back to other happy times – meditation, dhamma talks, the hilarious ‘pig attack’ and above all, meeting some wonderful people.

Ajahn presented some certificates to those who had been there from the beginning to help to promote the temple in the community. He then presented the children with gifts which brought much delight to all of us.

Lunch was like a huge indoor picnic – people on chairs or cross-legged on the floor, live music and delicious food. We had a great time meeting new friends – from Melbourne and Sydney and others from the local area that had been there in the early days.

It was an excellent day and I look forward to being a part of many more future anniversary celebrations in the future.
I would like to congratulate Ajahn Satit on his commitment in travelling to Albury each week and working so hard to give our community a place to come together and learn from him and each other. Each week he provides us with his knowledge and inspiration to be better people.

Like Loading...
This entry was posted in Local News and tagged Ajahn Satit, Wat Buddhavongsayaram Inc., watalbury. Bookmark the permalink.