This event was specially organized to commemorate the 2600th anniversary of Buddha’s enlightenment. The Buddha relic brought from Sri Lanka was on public display. Many hundreds of Buddhists and interested residents of Auckland made their way to MT Albert War Memorial. The ground in front of the War Memorial on this Sunday was changed to an outdoor Buddhist temple. The Buddha image drew much attention and could be seen by road users on New North Road. Some of them actually found a spot to park their car and came to see the event.

Sri Lankan Honorary Consul, Mr Viduranga Aruna Abeygoonesekera was present to mark this special event. Ten monks from Australia and New Zealand were also invited, great merit making and a blessing for all who participated. It is such a rare opportunity to have ten monks present for alms offering. 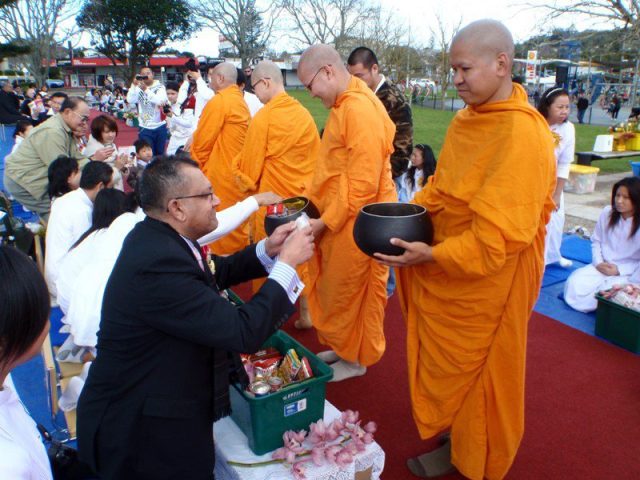 After the alms offering finished, faithful Buddhists come to pay respect to the Buddha’s relic by bowing with their whole heart to the Lord Buddha. Wishing for themselves (and others) to have good health, wealth and a successful life by the power of the triple gem and the merit that they have made.