I was asked by Ajahn Satit to share my experiences at the temple in Albury.
My family and myself had been occasional visitor to the temple, and we had noticed an article in the Border Mail newspaper around the last week of December that a new monk was looking after the temple and alms would be collected in Dean Street, on the first Sunday of each month. We decided to visit the temple on the Saturday after we had read the newspaper article and we were pleasantly surprised to find the temple had undergone a complete transformation and revitalisation. The other revelation was to meet Ajarn Satit and the fluency he had in the English language, this gave me a better access to Buddhism than I previously had, and allowed me to find answers to most of the unanswered questions I previously had.

First participation for alms offering on Dean Street.
Following the publicity from the newspaper article many people turned out to give alms on the first Sunday of the month in January, both young and old, and people from many nationalities. Following alms, we returned to the temple and had a blessing and meal and everyone felt that the temple had been transformed for the butter.

We then began to attend the temple every Sunday, at the beginning the temple did not receive the attendance that followed the initial alms offering. Once the word was spread from new participants to the temple that number began to grow, but the Albury location can offer some sever weather conditions and during June with the temperature near zero, we found that Mam (my wife), Ploy (my daughter) & myself and Ajarn Satit were the only people present at the temple. As the cold weather passed the people started to return once again.

The community
As the word spread, so did the people attending the temple with some driving from between 60 to 150 kilometres on a Sunday to attend service. On our yearly trip to Thailand and also this time a visit to Wat Dhanmakaya we missed the highest attendance to date with over 40 people present. But recently the new comers have bean to grow again also the regulars are returning with the warms weather.

Activities at the temple
We start each Sunday with an introduction and welcome to the newcomers and others we have not seen for a while. We then follow this with a short traditional Pali chanting.

Meditation
The chanting is then followed by a 20 minute meditation session if newcomers are present so that they are comfortable for the first time meditation, if there are regulars only at the service this may go a bit longer.

Dhamma talks
Meditation is followed by a Dhamma talk, and this is always well received by both the regulars and newcomers, and only serves to increase one’s own knowledge towards a life of improvement and well being.

Requests five precepts and food offering
The Dhamma talk for the day is followed by the requesting of the five precepts and a food offering to the attending monk or monks. The matter of ceremonies for this section of the day is conducted by Ploy & Ploy (Ploy Lek) and (Ploy Yai) both young children which serves to assist them in the betterment of the English language and participation in the temple.

Lunch time a great time to share experience
Following the requests food is offered and also explained to newcomers and welcoming them to participate. A shared meal is then held amongst all the attendees with the majority staying for the meal after the service is finished. *Jo the sweets are always great!!!*. There is also some people who stay on in the after to watch the service telecast on DMC. 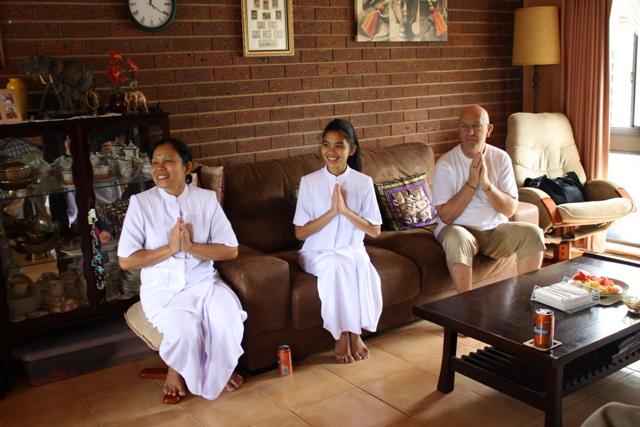 I know experience and change on my life and my family life had been beyond words, since the arrival of Ajahn Satit, it was what we were all looking for but had been unable to find until that point in time. I had followed Buddhism for 11 years but never found the path I was looking for, an English speaking monk (Ajahn Satit) and the knowledge he was able to share, and the transformation of the Albury temple completely changed my life. This also occurred at a time in my life when I was extremely sick and having extensive treatment to cure my suffering, the stress was significant in our family and the timing of the Albury temple transformation was a blessing we now believe was meant to be, it has changed our lives forever. This is also a factor for many other regulars who have spoken with that believe through the communication of our English speaking monks (Ajahn Satit) we have been able to butter learn and also learn much quicker than we would have been able to.

I can only recommend to others the warmth, friendliness and knowledge the Albury temple has to offer, so if you happen to be passing that way, please call in and see us sometime.

2 Responses to What experiences at Wat Buddhavongsayaram, Albury are like?