The afternoon of Tuesday 25th September, many members of a Buddhist temple came together, to witness and congratulate Ajahn Satit, one of their teaching monks, on his success in Master of Professional Communication(MPC) at the UWS Parramatta campus where the graduation ceremony was held. 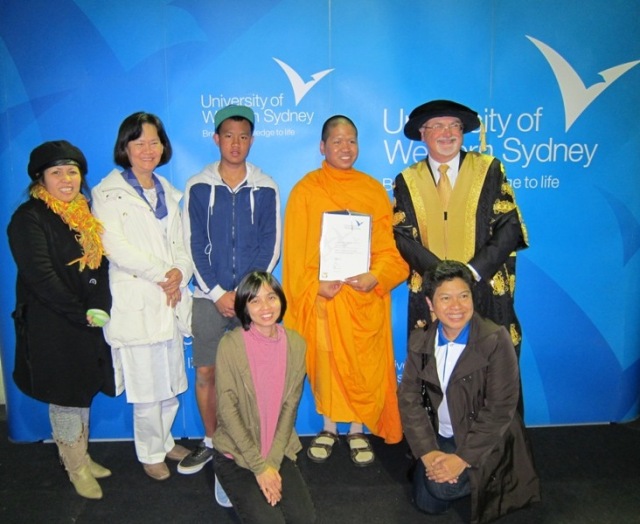 Under the code of conduct for Buddhist monks, he cannot be in the graduation regalia. After a lengthy discussion at the registration desk, he went on the stage and proudly received the degree in his saffron robe.

“UWS is one of the most culturally diverse universities in Australia with more than 100 cultural and ethnic backgrounds represented in our student community and over 20% of staff coming from culturally and linguistically diverse backgrounds”
stated UWS on its website.

Despite the heavy load of his duties and commitments to serve Buddhist community, Ajahn Satit still kept the right balance of his part time study and the temple work.

“I really like the slogan ‘Bringing knowledge to life’, the knowledge I gained from the course, I applied to my work directly” said Ajahn Satit.

He emphasises that good communication skill is needed, not only for the media people but it is also very useful for moral teachers. They have to understand and be able to influence the society towards a better direction. 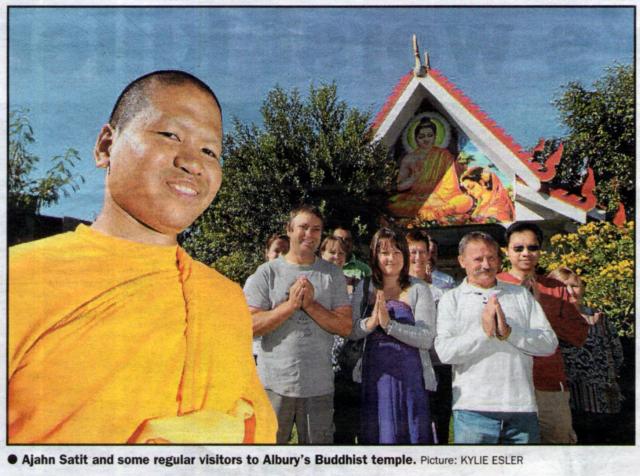 In 2011, half way through his study in this course, Ajahn Satit was unexpectedly moved to Albury to challengingly re-open a small Buddhist temple. He took that challenge by turning the crisis into opportunity and put the knowledge into practice. He used the communication strategy in the re-opening of this temple as his Project II in the MPC course. The successfulness of the project does not only give him a good grade but it also gives happiness to many Buddhists who enjoy the services of the Albury Buddhist temple.

The coming Sunday 30 September, members of the Albury temple are awaiting to congratulate and celebrate with him on his success in the MPC.

“A fantastic celebration, of what he have been able to do for us personally and the community” said Gary, the Buddha Shop, Albury.

3 Responses to Bringing knowledge to life