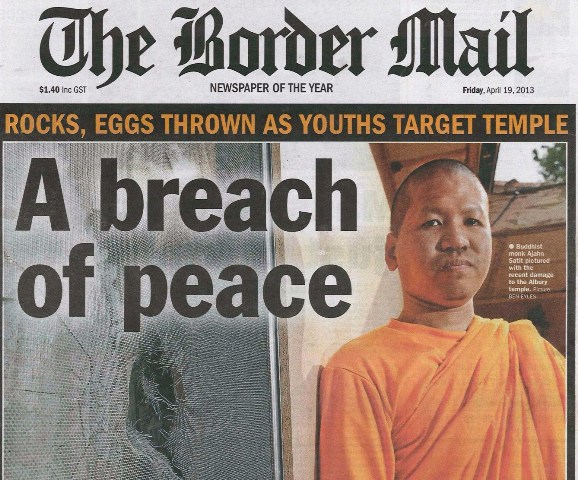 Once again the Buddhist temple in Albury has reacted to the recent incident of vandalism, in the way that complies with the principle of one of the world most peaceful religions.

Last year, when the temple was twice broken into and most of the equipments used for Sunday service together with garden tools were stolen; the monk analysed that the thieves were driven by greed. His solution to stop the thieves to come back was to donate any valuable things that remain in the temple to the local charities. He then could keep the temple a peaceful place again. 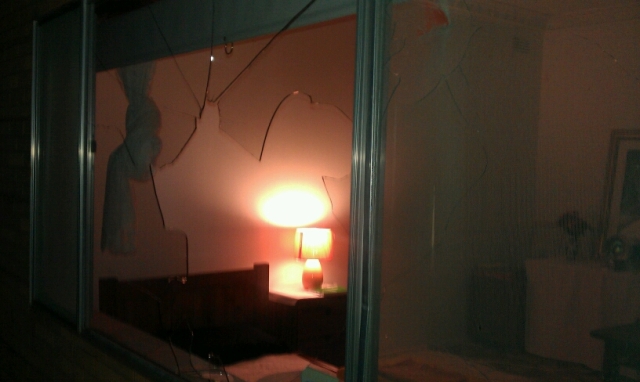 As for the recent incidents of vandalism which happened repeatedly, five times in three weeks; the monk chose a non-aggressive approach, not even a word was said, to the vandals. The second incident was found on Sunday 7th April 2013 morning when Ajahn Satit has just arrived from Sydney for Sunday service. He found windows were broken by number of rocks thrown in, which were evidenced on the ground. He left the problem aside and carried on the Sunday service as usual. At the Dhamma talk he said to the audience that the attack was an exercise of tolerance for all. Whoever conducts bad deeds will receive the consequence themselves. 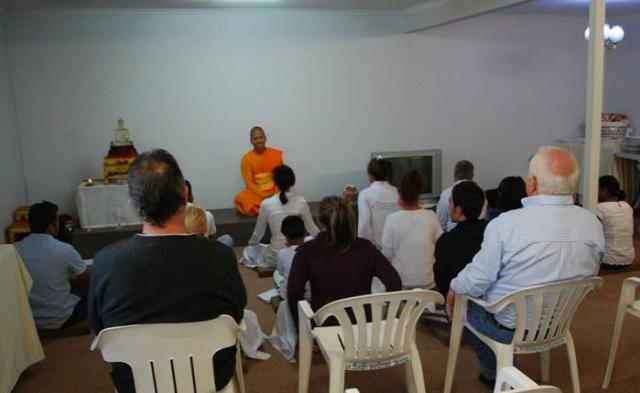 The vandals were continuing their action; they may feel proud of their evil achievement when they should really be ashamed of their doing – what they did was vandalising the residence of a harmless man.

Ajahn Satit changed the crisis, the result of the incident that day, to be an opportunity for those who attended the temple on the day, to gain extra merit in helping to fix the windows, putting away the broken glass and so on.

The media have been very helpful in bringing this evil act to the public knowledge and may even help bring this vandalism to an end. With the coverage in the Border Mail and both local TV channels (Win TV and Prime TV), people around town have been talking about the incidents. Many come to visit the temple, some sent words of care and comfort on the temple facebook page, some come to make donation. It seems that everyone in town now knows the monk who lives at South Albury temple and they care for his welfare.

Ajahn Satit and members of Wat Albury are very grateful to all the kind gestures shown by the community towards the temple, they are very much appreciated. Also a special thank and appreciation to Innovative Security Group Australia Pty Ltd, Michel McLeish CEO and the team who offer to help patrolling the street at the time it is most needed.