The Opening Ceremony of Buddha Hall in Western Australia

The Opening Ceremony of Buddha Hall in Western Australia

The Buddha Hall or Uposatha is the assembly for Buddhist Sangha in the temple for certain ceremonies such as monk ordination. In order to formally announce a building an Uposatha, it needs number of monks to chant to define the border of Uposatha (or Srima) which is marked by number of objects called Nimi. 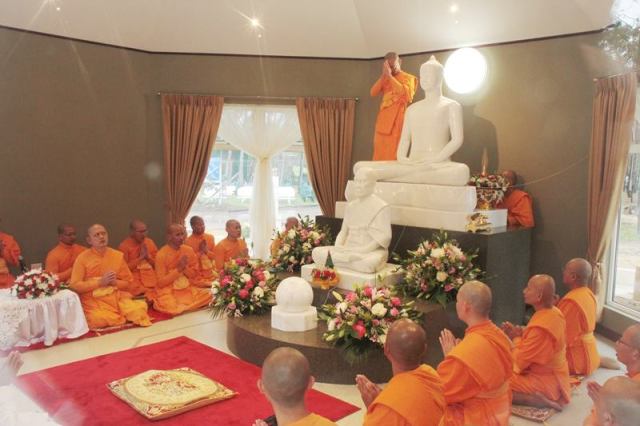 The main feature of every Uposatha is a Buddha Image. As for this new hall, it is the white jade Dhammakaya Buddha image. The construction of this Buddha hall and the Buddha image were greatly supported by the lay community led by Ms Pannarai Cherif who was appointed on the day to be the representative of the community to offer the Uposatha to the Sangha.

It has been a long but fulfilling development for this centre from a group of Buddhist community that started its activities in a small house in Kingsley to having the permanent place of Wat Phra Dhammakaya Western Australia in this serene city of Mandurah.

Wat Phra Dhammakaya Western Australia and its members always welcome new comers and visitors to visit anytime and/or participating in its monthly event of the first Sunday ceremony which activities include meditation, Dhamma talk, requesting of five precepts and alms offering.