A thousand Buddhists in the Heart of Sydney

Pansa or Vassa, the time of Buddhist lent was filled with a warming atmosphere and the sound of graceful traditional Thai music. With its open and welcoming invitation for all to join, the Buddhist community of Sydney gathered in numbers at Belmore Park, Sydney on the morning of Sunday 17th July for the auspicious occasion. This event was organised by the Thai Buddhist Student Association of Australia.

Despite being over-shadowed by a mild overcast, people remained passionate about enduring throughout, hoping that the rain would not fall.

Nine monks from Wat Phra Dhammakaya, Sydney took part in the ceremony. The ceremony was led by the most Venerable Suddhammo (Phrakrupaladnayokvorawat), and was opened with Buddhist Chanting. 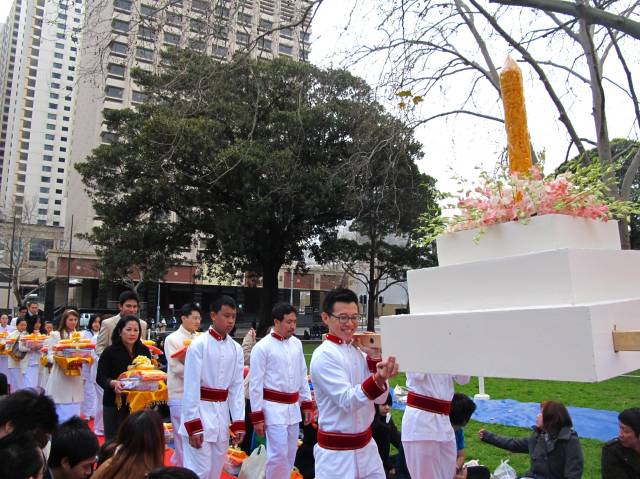 Belmore Park was appealing, decorated by flowers, orange supersized candles, and also other objects symbolic to this ceremony. Young ladies dressed in white created a pleasant feel as they walked the red path with beautifully arranged flowers and also the Large Candle (Pansa Candle) which was marched down by a group of young men, paying homage to the Lord Buddha during this time of lent. 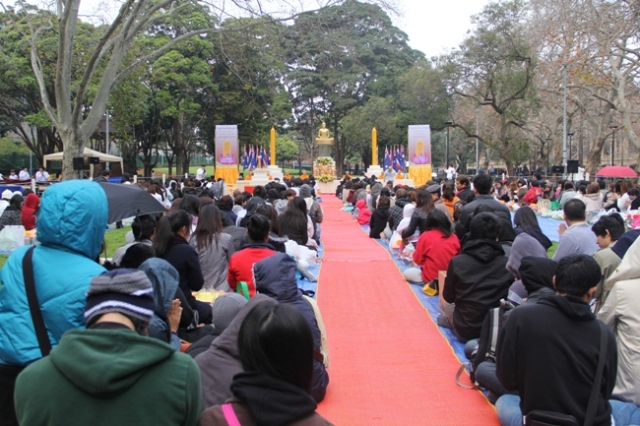 As the sounds of the park surroundings faded into the voice of most Venerable Suddhammo, people sat in a harmonious and united manner while resting their minds at ease in meditation, aware that peace was present.

The ceremony continued accordingly with the offering of candles and Sangha Dana to the monastic community. It was easily witnessed by all that people were offering from their hearts; their faces shone. From that instant they were quiet until the procession of their gifts and they received a special blessing from a monk.

Once more, people united in meditation, while the flow of people arriving was continuous. The celebration had captured the attention of passers-by, as some may not have seen anything like it before, drawing them into this symbolic Buddhist ceremony.

Then the ceremony was followed by the second part, where lines of people waited enthusiastically for the monks as they slowly passed each person to receive their alms offerings (Takbat). To start with, some people were so eager in excitement to offer alms that they were unable to hold themselves back, fearful that the monks would miss them.

Passers by who were unaware of the event until passing, although both the candle offering and alms offering had already finished, were all eager to participate in the proceedings and in making offerings if they wished to do so. 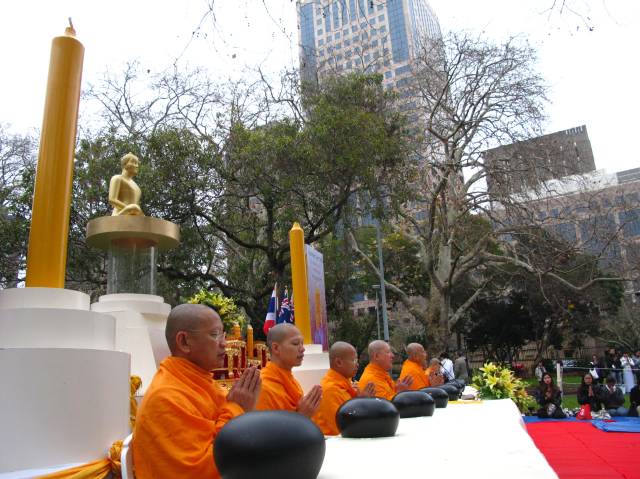 As the event was coming to an end, the most Venerable Suddhammo and members of the Sangha concluded in giving a blessing to everyone present. The event was thoroughly enjoyed by all who united for Buddhist Lent. Even before the event had ended people were already sharing their happiness in creating merit along with their friends and with the new friends around them. 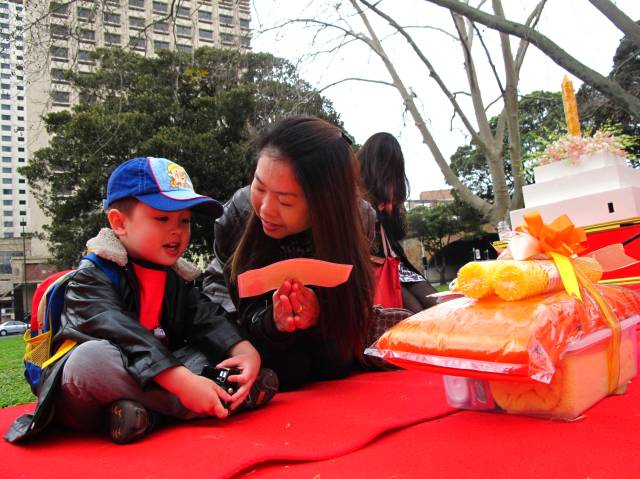