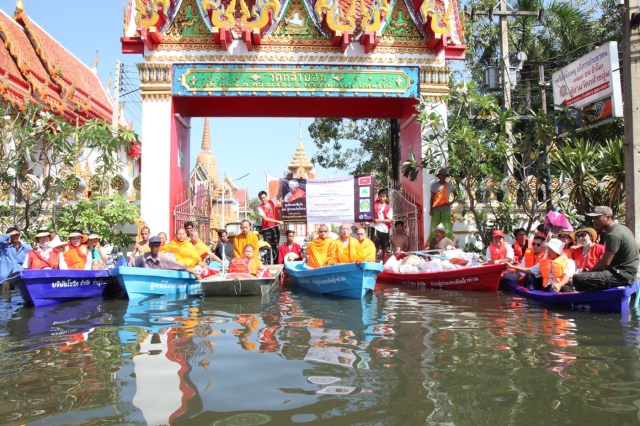 On the 3rd November Most Ven. Phra Kru Palad Nayogvorawat (Most Ven. Sudhammo) Chair Person of Centre of Thailand Flood Relief 2011 in Oceania patronised by Somdet Phra Puttajarn the chairperson of the Supreme of Patriarch’s Representative Committee with the team from Dhammakaya Foudation Thailand made a personal visit to temples affected by flood in Patumtani the province north of Bangkok.

Many temples and residences in the area have been under floodwater for a good part of a month. Some temples that are not flooded have been the refuge for residents that affected by the flood. InThailand, in the rural area in particular, temples and monks are the top of the list of places and people that ones will go to when they are in danger or in difficult time. Volunteers from the Flood Relief Centre in Patumtani have been out there distributing foods and other necessities to those people every day.

Through this centre, the donation from Australia and Oceania region was distributed to those flood victims. Most Ven. Sudhammo represented the people of Oceania bringing help, care and assistance to them himself and let them know that there were people from the other side of the world that care about their welfare. He did not only assisting in their physical needs but also giving good Dhamma talks and led them in a meditation time to boost their morale in this trying time. 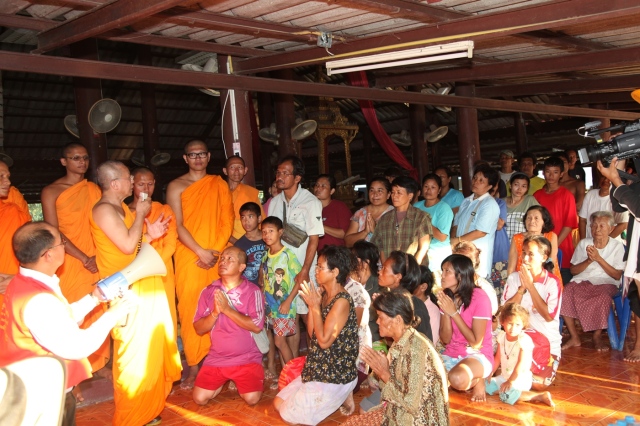 Below are the Links of fundraising activities in conjunction with the Oceania Thailand flood relief centre patronised by Somdej Phra Puttajarn, the chairperson of the Supreme of Patriarch’s Representative Committee.